This blog post has nothing to do with anything that happened in the battery world. But it happened this week, and it happened to me, and it’s my blog so I will make this post.

Regular readers (all 3 of you) of this blog know that the name of this blog is inspired by the popular podcast This Week in Tech (TWiT) run by Leo Laporte. You can see more in my first post.

Without getting into details I got to go to the TWiT cottage (the place where they record the show) to watch a recording of episode 259 this Sunday afternoon. The name of the show is “Next Stop: Gilbert, Arizona”. You can listen to it here.

The whole process of making the episode was sort of fascinating. The TWiT cottage is in Petaluma (i.e., middle-of-nowhere North San Francisco Bay). It is basically a 4 room cottage that has been converted to a recording studio. There were 3 “watchers”, one guest on the show and Leo (there were 3 off-site guests on Skype). All 5 of us were jammed into a small room full of cameras, and recording mics. Leo was twiddling on knobs, turning things up and down, typing on his computer, AND talking all at the same time. Amazing!

Needless of say, everything said in the room is recorded and is streamed live.

The inhouse guest was Brian Brushwood (pictured below), who is a magician and fire eater (no, really!). The other guests were John C. Dvorak (who is a regular on the show and is a tech guru), Baratunde Thurston (the web editor of The Onion. You know The Onion, don’t you?), and Felicia Day (who is a star on the web series, The Guild).

When I entered the room, they were setting up for the show. I was introduced and immediately Leo and Brian started asking me questions on batteries: is there enough lithium?, is there a moore’s law of batteries?, what is happening to battery development? When the off-site guests heard who I was, they started with “should I discharge my lithium batteries all the way?”. Apparently, they don’t read my blog (sigh). Anyway, it was the perfect opportunity to plug TWiB.

Remember that all this is live. There are people out there who are listening to all this. They (apparently) heard me plug TWiB. Anyway, I was checking the stats on my blog afterwards and at 3 PM (around the time I was plugging TWiB), 500+ people logged into the site! Ah… the power of the plug.

At the end of the show, Leo volunteered to take pictures with the watchers. Here is mine with Leo. Brian is in the back doing something funny. The idea is apparently called Photo-bombing where someone in the crowd decides to ruin the great picture of your kids by doing something strange in the background. He was imitating that scenario.

Anyway, you can sum this experience up in one sentence: TWiB met TWiT and TWiB got 500 hits. 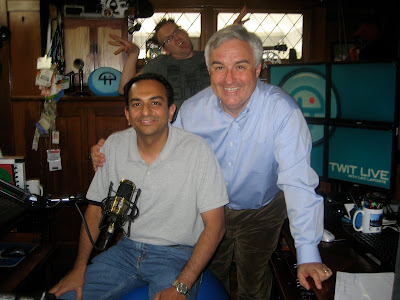