Back by Popular Demand-More Intercalation Chemistry, This Time with Sodium!

Folks: Happy New Year to all.

As I was off on my merry vacation, I noticed that the popularity of this blog had doubled!  And everyone seemed to be reading the post by Marca Doeff, our guest blogger.  After a few weeks of soothing by battered ego, I decided that one data point does not a trend make.  So we are trying to get another data point today with Marca's next post.  enjoy


It’s Marca again, enjoying her highly lucrative new career as substitute blogger for TWIB! What should I do with all the money I rake in from this gig? Buy a Tesla?  Hmmm, maybe a new BMW i8-they sure are pretty, aren’t they? Should I get a blue one or a silver one? Decisions, decisions! [Editor: Dream on. Get to the point, will you?]

Ahem, well, okay.  When last we left off, I was describing the concept of intercalation as it applies to batteries; i.e., when lithium ions insert into electrode materials. What I didn’t get around to saying is that lots of other things beside lithium ions can be intercalated into host structures-not only cations but also neutral species like molecules or polymer chains, and even sometimes anions (although, as far as I know, oxidative intercalation of anions only happens with graphite or disordered carbons with graphitic domains). Even before the lithium-ion battery was officially A Thing, people were having all sorts of fun sticking stuff between the layers of clays or graphite to make new materials with interesting properties (I even tried my hand at it Back In The Day). For the nerds among you (you know who you are!), there’s a classic paper by Mildred Dresselhaus (The Queen of Carbon Science!) called Intercalation Compounds of Graphite[1], which will tell you just about everything you need to know.

But I digress! At this point, you, my faithful readers (both of you), are probably tapping your feet impatiently saying something like “Well, if intercalation isn’t just limited to lithium ions, couldn’t we base a dual-intercalation battery on something else, like maybe SODIUM?” Very good! You all get gold stars, my nerdy blog-reading friends!

The sodium-ion battery or NIB, is a subject near and dear to my heart. You see, back when dinosaurs roamed the earth, in the early 90’s, when lithium-ion batteries were just getting started, I was playing around with this concept in the lab. Stan Whittingham had described not only reversible lithium insertion, but sodium insertion as well in his early papers on TiS2. Scientists like Keld West in Copenhagen, and T. Richard Jow at the U.S. Army Research Lab were also publishing work describing some intercalation compounds as possible cathodes for sodium-based batteries. So, I wasn’t necessarily the very first person to work on sodium intercalation, but I was definitely an early adopter.

The mad rush by the research community towards lithium-ion batteries at that time left me practically all by my lonesome to work on NIBs instead. (What can I say? Either I’ve always been ahead of my time or I’m hopelessly out of touch, I still haven’t figured out which). While NIBs, in principle, operate much like lithium-ion batteries, there are some differences. One is that sodium doesn’t really insert into graphite (the favorite anode material for lithium-ion batteries), for reasons that are too complicated to go into here (read Millie’s paper if you want to find out why!). There is some reversible redox activity with disordered carbons, though, and I published an early paper on that. I also had a lot of fun working on some cathode materials, and even patented one with the nominal composition Na0.44MnO2. It has a very robust and cool-looking tunnel structure, which cycles sodium ions in and out very well-and lithium ions, too, if you ion exchange it and put it in a lithium cell. 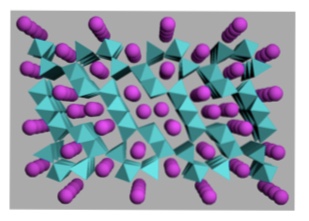 Tunnel structure of Na0.44MnO2, a cathode material for sodium-ion batteries.

The excitement around lithium-ion batteries soon swallowed me up along with practically everyone else in the battery world. Almost nothing happened for more than twenty years in NIB research. Then, starting a few years ago, the field started heating up again. 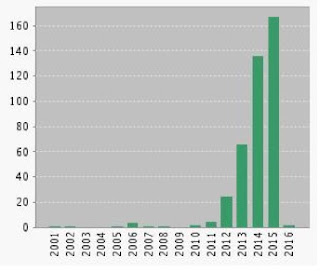 What happened around 2012?  Well, for one thing, lithium-ion batteries had matured and material scientists were looking around for something new to do. The battery community was talking a lot about “Beyond Lithium Ion” (which really meant taking a new look at some old chemistries!) And there were screaming headlines like this one:

Now, are we really going to run out of lithium? Not likely, at least not in the long run. But when you read that the Tesla Gigafactory is projected to need almost half the world’s current annual production of lithium hydroxide, you gotta wonder if there might be problems with the supply chain, at least temporarily. It takes time to ramp up production, after all. It might be wise to have a “Plan B” battery-wise, and there’s tons more sodium in the world than lithium, TONS. It’s a lot cheaper, too, plus there are some other cost-saving benefits to sodium systems, like the fact that you can replace copper current collectors on the anode side with aluminum because sodium doesn’t alloy with aluminum, whereas lithium does.

Because NIBs are so close conceptually to lithium-ion batteries, the development time should be shorter than that of other “Beyond Lithium Ion” systems. We can simply leverage all the engineering knowledge from the past twenty-five years work on lithium-ion batteries. All these considerations got some people excited enough to start companies based on NIBs, like Jerry Barker at Faradion. He’s targeting e-bikes. Then there is Jay Whitacre, founder of Aquion. Now there’s a unique concept-a sodium ion battery using an aqueous electrolyte, for grid storage! That system is potentially incredibly cheap, which is especially important for that application. One of the cathode materials that Aquion uses is my old friend, Na0.44MnO2.

All this new NIB activity means that my old sodium-ion battery papers, which languished for many years, have started heaping up citations, sort of like Sleeping Beauty. Sadly, I have to be contented with fame, not fortune, because the patents expired some time ago. But that’s okay, since I’m raking in the big bucks here at TWIB instead!