A Brief History of Cathodes or, Thinking Positively about Li-ion Batteries


While Venkat is off trekking the Himalayas, fighting space aliens, solving world hunger, fixing his Roomba, on a well-deserved vacation, he has asked me, (moi, Marca Doeff, world famous battery scientist, lowly lab rat), to whip up a light and fluffy something to feed the blog. “Fine”, I said, “should I talk about my cats or the movie I saw last week?” Judging from his response, that’s not what he had in mind (wow, I didn’t know there were so many cuss words in Tamil!). Instead I concocted this little history of cathodes for lithium-ion batteries, complete with pictures (if you want cat stories, you’re going to have to look elsewhere on the internets).
It all started around the mid 70’s or so, when Stan Whittingham at Exxon announced his newly discovered phenomenon of lithium ion intercalation into TiS2, in a letter to the journal Science. It turns out that TiS2, which has the layered structure shown below, could be reduced electrochemically while simultaneously inserting lithium ions between the layers. Better yet, this process was entirely reversible! Everyone in those days was interested in making a secondary battery with a lithium metal anode work. That announcement set off a race in research labs everywhere to look for other intercalation compounds. 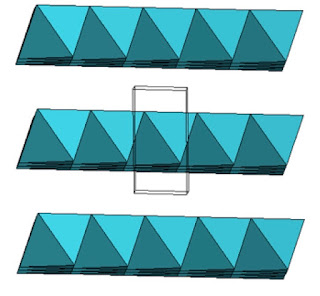 The layered structure of TiS2.

In 1980, John Goodenough, who was then at Oxford, wrote a paper in the Materials Research Bulletin describing another layered compound, LiCoO2 or LCO. This one was made with lithium already in the structure, so it had to be charged up before you could use it in a battery. The battery companies at the time didn’t like this, so they said “Goodenough, it’s not good enough!” (haha, be kind to me, it’s lonely in the lab.) LCO also was pretty oxidizing once you started taking the lithium ions out, and the electrolytes of the day just couldn’t handle it. The last laugh was on the battery companies that dissed John Goodenough, though, because just a few years later, someone figured out how to make a graphite anode work, and the lithium-ion battery was born, and then commercialized by Sony in 1991. Having lithium in the cathode structure for that configuration turned out to be just what was needed, so that you could assemble the cell in the discharged state and then charge it up. Moreover, by that time, there were better electrolytes that didn’t fall apart so readily. The higher potential at which LCO operated compared to TiS2 was an asset, not a liability, since it meant higher energy densities in cells. Batteries with TiS2 and the problematic lithium anode were out, and Li-ion batteries with LiCoO2 cathodes and graphite anodes were in! 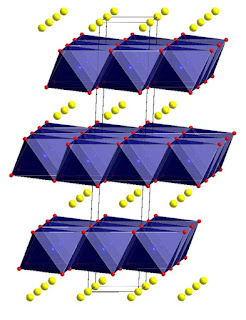 End of story? No, that was really just the beginning. Cobalt is awfully expensive and somewhat scarce. Everyone wanted a cathode that was cheaper with more abundant elements in it, like iron or manganese or nickel. People like Jeff Dahn in Canada, Claude Delmas in France, and Tom Ohzuku in Japan started looking at other layered compounds with various combinations of nickel and cobalt and manganese in them and sometimes a soupçon of aluminum or magnesium. They and many other scientists around the world fiddled around with the formulas to get the best energy density, safety, and performance. These layered compounds are often called by their initials, like NCA (nickel cobalt aluminum) and NMC (nickel manganese cobalt) and are among the most technologically important cathodes we have today.
But let’s backtrack a bit. A few years after LiCoO2 was discovered, Mike Thackeray, who was living in South Africa at the time, visited John Goodenough’s lab and started fooling around with manganese oxides. Only problem was that the compounds he was looking at weren’t layered but had spinel structures instead. Strictly speaking, they weren’t intercalation compounds, because “intercalation” really refers to the insertion of ions between layers, like leaves of a calendar (“inter”=between and “calation” is related to the word “calendar” from the Latin word “calends” for the first day of the month). Nevertheless, lithium ions could be removed from lithium manganese oxide (LiMn2O4, LMO) and inserted back in again through three-dimensional diffusional pathways in the structure. Nowadays, the use of the term “intercalation” has expanded to mean insertion of ions not only into layered structures (the original meaning) but other types of structures as well. I guess if you are a grammar prescriptivist, this shift of the language is an offense against all that is good and holy, but if you are a grammar descriptivist like I am, it’s simply a useful word to use to describe the general phenomenon of ion insertion into all kinds of structures.
Another surprise was the olivine-structured LiFePO4 or LFP (Goodenough, again). It wasn’t even electronically conducting! Most intercalation compounds are mixed conductors; that is, both ions and electrons can move through the structure, which is necessary for them to function. A few of them start out nearly electronically insulating, but become more conductive as they undergo redox (notably, the spinel anode material Li4Ti5O12). All you have to do is get the reaction started (say, on particle surfaces) and then it can propagate. In contrast, what you get when you oxidize LiFePO4 is another nearly insulating compound, FePO4. To this day, it is somewhat of a mystery of how and why it works, and scientists spend lots of time dreaming up exotic experiments to explain its behavior and arguing over what is really happening. Hey, we have to remain employed somehow!

On the left, the spinel structure of LMO and on the right, that of the olivine LFP. The yellow spheres represent Li ions in the structures.

It turns out that lots of structures with transition metals in them can insert lithium ions, even some that are completely disordered. Of course, the majority of these materials fail on some metric or other; some of them don’t have high enough capacity or energy density, some have rare or toxic metals in them, or they do something weird like dissolve or change their voltage characteristics when they are cycled. Of the hundreds of compounds that have been studied over the past forty years, only a few have passed muster. A modified version of LCO is used in consumer electronic batteries, and, depending on manufacturer, hybrid electric, plug-in hybrid, and electric vehicle batteries contain LFP, NCA, NMC, LMO, or mixtures of the last two.


Will something better come along? It’s hard to beat what we have now, but researchers are still trying. To quote the immortal Yogi Berra, it’s tough to make predictions, especially about the future!